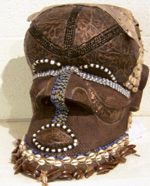 In the Congo, the Kuba Kingdom mythology is centered around three figures that are represented by a masked characters: one being that of Woot (the creator of the ruling dynasty), Woot’s spouse, and Bwoom. The attributed identity of Bwoom varies. It has been said that Bwoom is representative of the king’s younger brother, a person of Twa (pygmy) descent, a commoner, or one who opposes the king’s authority. Click below to see a 360 degree rotation of mask.