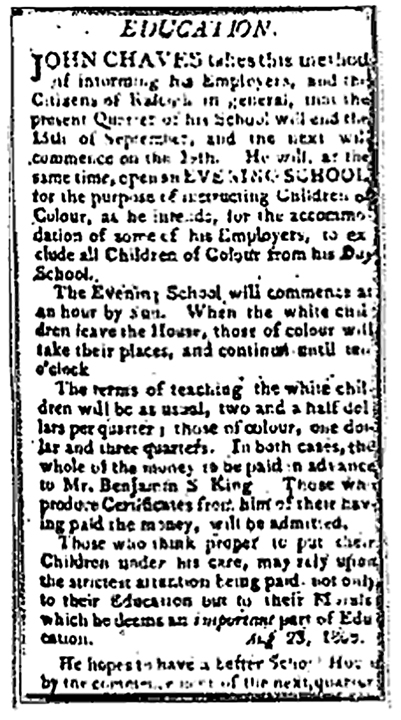 This advertisement ran in the Aug. 26, 1808, edition of the Raleigh Register (it was submitted on August 23rd). John Chavis (or Chaves in this ad) was a Presbyterian educator and minister, as well as a free black. He was educated at the College of New Jersey (now Princeton University) and at Washington College (now Washington & Lee) in Lexington, Virginia.

Here's a transcript of the ad for easier reading —
"John Chaves takes this method of informing his Employers, and the Citizens of Raleigh in general, that the present Quarter of his School will end the 15th of September, and the next will commence on the 19th. He will, at the same time, open an EVENING SCHOOL for the purpose of instructing Children of Colour, as he intends, for the accommodation of some of his Employers, to exclude all Children of Colour from his Day School.

The Evening School will commence at an hour by Sun. When the white children leave the House, those of colour will take their places, and continue until ten o'clock.

The terms of teaching the white children will be as usual, two and a half dollars per quarter; those of colour, one dollar and three quarters. In both cases, the whole of the money to be paid in advance to Mr. Benjamin S. King. Those who produce Certificats from him of their having paid the money, will be admitted.

Those who think proper to put their Children under his care, may rely upon the strictest attention being paid, not only to their Education but to their Morals, which he deems an important part of Education.

He hopes to have better School House by the commencement of the next quarter."