The Presbyterian Heritage Center in Montreat houses a significant collection of African artifacts. These artifacts come from across the continent from Liberia to the Congo and on to the Sudan. The largest collection is from the Congo. It is comprised of items gathered by Presbyterian missionaries, primarily from the beginning of ethnographic studies in the early 1890s to the 1930s. Congo items come from the Sheppard, Reynolds, Edwards, Robertson, Hoffeld, Worth, McDonald, McCutchen-Stixrud and other collections. 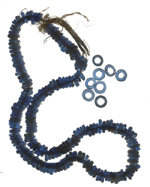 Here are just two items from this Congo collection.

Sometimes referred to as Dutch Donuts, these simple trade beads were given by European traders in return for goods and services. More ornate glass beads were sometimes used as payment for slaves during the 18th and early 19th centuries. The age of this glass bead necklace has ranged in estimates from the 1600s to the 1800s (most probable). They were acquired by Presbyterian missionaries in the Congo, Bajuba territory.

Object # DO 2013.9.1. Wooden stool probably hand-carved by the Luba of the Democratic Republic of the Congo. Nude woman with round face, eyes closed. Markings on both sides of torso. 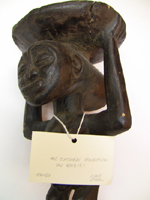 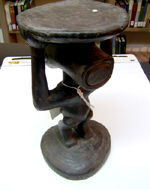 Stools with caryatid figures are among the most significant possessions of a Luba chief and are an integral part of the investiture ceremony that establishes his right to rule.

Luba royal insignia often depict women whose high status is indicated by their elaborate coiffures and ornamental scarification marks. In the past, women, particularly the female relatives of kings, were instrumental in expanding and unifying the Luba kingdom. By marrying chiefs in outlying areas, these women created important bonds of kinship and allegiance. Because the Luba trace succession and inheritance through the female line, the caryatid imagery found on Luba royal seats represents female ancestors who provide symbolic support for the chief's reign while serving as a physical support for his person. Source: Metropolitan Museum of Art