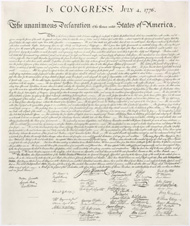 n August 2, 1776, the Declaration of Independence was signed (this is the original copy displayed in Washington, DC; click link to see the faded original). On July 2, the vote was taken on independence and the Declaration was adopted on July 4th. The sixth president of the College of New Jersey (now Princeton), Presbyterian minister John Witherspoon (shown at left) was the only clergyman to sign the Declaration. You can click here to open a very large, more readable copy of the Declaration. Try to find Rev. Witherspoon's signature. Once opened, you can click on the image to make it supersized on your monitor.

On August 3, 1879, Presbyterian minister and Reverend Samuel Hall Young opened the Wrangell, Alaska, Presbyterian church with 18 native Alaskan Indians and 5 other communicants. It was one of the early successes of the Presbyterian Church mission in the territory. During 1879, Young also traveled Alaska islands with California naturalist John Muir.

On August 5, 1657, a letter to the Classis of Amsterdam from Johannes Megapolensis and Samuel Drisius read: "At Hempsted, about seven leagues from here, there live some Independents. There are also many of our own church, and some Presbyterians. They have a Presbyterian preacher, Richard Denton, a pious, godly and learned man, who is in agreement with our church in everything. The Independents of the place listen attentively to his sermons; but when he began to baptize the children of parents who are not members of the church, they rushed out of the church." From another letter dated Oct. 22, 1657, the same writers continue: "Mr. Richard Denton, who is sound in faith, of a friendly disposition, and beloved by all, cannot be induced by us to remain, although we have earnestly tried to do this in various ways. He first went to Virginia to seek a situation, complaining of lack of salary, and that he was getting in debt, but he has returned thence. He is now fully resolved to go to old England, because of his wife who is sickly will not go without him, and there is need of their going there on account of a legacy of four hundred pounds sterling lately left by a deceased friend, and which they cannot obtain except by their personal presence."

On August 6, 1904, President John Huyler and the Montreat board (interdenominational at this point) considered a proposal to turn over the operation of Montreat to the Presbyterian evangelist and Rev. John Wilbur Chapman, head of the Winona Lake, Illinois, religious conference center ("The World's Largest Bible Conference" at the time). Montreat would be run with conferences similiar to those at Winona Lake or at Northfield, Massachusetts. Nothing was ever implemented from this proposal. Montreat has easily outsurvived Winona Lake and Northfield — becoming the second oldest summer religious conference center behind Ocean Grove, NJ.

On August 10, 1877, Amanda McFarland, a dedicated Presbyterian missionary, took charge of the mission school at Fort Wrangell, Alaska. The wife of a Presbyterian minister from Illinois, McFarland and her husband opened a mission to the New Mexico Indians in 1867 and later to the Nez Pierce in the 1870s. For a time, she was the only Protestant missionary in Alaska.

On August 11, 1847, Presbyterian missionary Charles Williams Forman sails for India. With early missionary pioneer to India (1835) the Rev. John Newton, Forman will begin missionary work at Lahore (now in Pakistan). He will spend more than forty years in the Punjab. In 1864, he founds a college in Lahore that becomes known as the Forman Christian College.

On August 13, 1947, Chaplain Alexander J. McKelway (Presbyterian) was appointed Director of Chaplain Service for the Department of Veteran Affairs.

On August 15, 1862, the Rev. Robert Lewis Dabney resigned as adjutant, or chief of staff, from Stonewall Jackson's brigade. Initially opposed to secession, Presbyterian Reverend Dabney (pictured) sided with his state in the conflict. In May 1861, he began four months of service as chaplain to the 18th Virginia Infantry Regiment before returning to his professorial duties at the Union Theological Seminary (Hampton-Sydney, VA). Presbyterian Thomas J. "Stonewall" Jackson often heard Dabney preach and asked him to serve as his adjutant which he was appointed to on April 22, 1862. Illness forced him to resign on August 15, 1862. When Jackson's widow later asked Dabney to write a biography of the general, which he published as Life and Campaigns of Lieut.-Gen. Thomas J. Jackson (Stonewall Jackson).

On August 16, 1874, Rev. Charles Grandison Finney died. He conducted national and international revivals, being called to the Free Presbyterian Chatham Street Chapel in New York City in 1832. Sometimes referred to as the father of modern revivalism, Rev. Finney would later become a Congregational minister and then move to Ohio to serve as president of Oberlin College from 1852 to 1866.

On August 17, 1643, the Scottish General Assembly approved The Solemn League and Covenant, which gave Scottish Presbyterians the same legal rights as the Anglicans in England.

On Aug 18, 1838, the first Presbyterian Church in North America west of the Rocky Mountains was organized at the house of Dr. Marcus and Narcissa Whitman, at the Waiilatpu Mission station, six miles west of the present city of Walla Walla, Wash. On November 29, 1847, the Whitmans and others are the station are killed as they local indians blamed them for a smallpox outbreak that took many lives.

On August 19, 1954,the Presbyterian Camp on Okoboji (in Milford, Iowa) was incorporated. Created by the Sioux City Presbytery, the camp opened its first summer of operation in 1956.

On August 21, 1965, the Rev. Dr. Martin Luther King, Jr., traveled to Montreat, after returning from Los Angeles and the scenes of the Watts Riots, to speak to a Presbyterian conference.

On August 22, 1906, Mountain Retreat Association President John S. Huyler turned over the Presidency to Rev. James R. Howerton as Presbyterians continued the transition of Montreat to Presbyterian control. Huyler was America's Candy King at the turn of the 20th century, He had helped fund the founding of Montreat, and forgave the remaining debt to him in 1910.

On August 25, 1893, the World's Congress of Religions opened in Chicago under the auspices of the World's Columbian Exposition. Running from Aug. 25 to Oct. 15 at the Art Institute in Chicago, the World's Congress heard papers and presentations from clergymen throuhgout the world, including a paper on the history of the Cumberland Presbyerian Church. Mainline Presbyterians, Episcopalians and some Baptist denominations did not participate in the Congress. 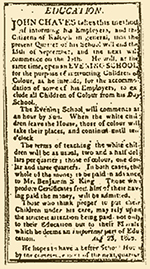 On August 26, 1808, the Raleigh (N.C.) Register ran an ad from Presbyterian educator, minister and free black John Chavis announcing the separation of his classical education school into a Day School for whites and an Evening School for black children. Since its start in 1805, the school had been integrated up to this point.

Sometime between 1792 and 1795, John Chavis (clcik name for fuller bio) from Virginia apparently resided in New Jersey, where he reportedly had taken private classes under the Rev. John Witherspoon in preparation for entering the Presbyterian ministry. In the recorded September 25, 1792, minutes of the trustees of the College of New Jersey (later Princeton University), there is a recommendation by Reverend John Blair that "Mr. Todd Henry, a Virginian, and John Chavis, a free black man of that state, ... be received" on the school's Leslie Fund. After Witherspoon's death in 1794, Chavis enrolled in Liberty Hall Academy in Lexington, Virginia, in 1795. The school was renamed Washington Academy in 1798, later becoming known as Washington College and then Washington & Lee in the late 1800s.

The Presbytery of Lexington (Virginia) licensed John Chavis as Preacher on November 19, 1800 — making him the First Black Ordained Presbyterian Minister in America.

The Rev. Dr. Gideon Blackburn was born in Augusta County, Va., on August 27, 1772. Reverend Backburn preached extensively in the Appalachian region and wasinstrumental inorganizing several new churches. On May 31, 1803, the Presbyterian General Assembly approved the Rev. Gideon Blackburn's proposal to establish a school for Cherokee children. He operated his schools for the Cherokees until 1810. Blackburn also is known for the churches he established in Tennessee and Kentucky. On November 12, 1823, Dr. Blackburn was installed pastor of the Presbyterian Church in Louisville, Ky. He was president of Centre College, Danville, Ky., from 1827 until 1830. In October 1833, he moved to Illinois. In 1835 he was an agent to raise funds for Illinois College in the eastern States, and while thus engaged, conceived a plan of establishing a theological seminary in Illinois, which resulted, after his death, in the establishment of an institution at Carlinsville, Ill. He died on August 23, 1838.

The Westminster Confession of Faith went to the General Assembly of the Church of Scotland, which adopted it without amendment on August 29, 1647.