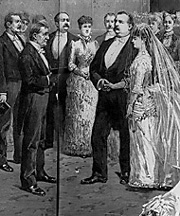 On June 2, 1930, Sarah E. Dickson became the first ordained woman Presbyterian elder in the Presbyterian Church in the United States of America (PCUSA). She was a member of the Wauwautosa (WI) Presbyterian Church (USA). The PCUSA General Assembly meeting in Cincinnati approved the ordination of women as elders, but defeated a measure to allow ordination as ministers.

On June 5, 1837, the Presbyterian Church in the United States of America voted to rescind the 1801 Plan of Union with Congregationalists. That action labeled four New School Presbyterian synods brought in by the 1801 plan “to be out of the ecclesiastical connection of the Presbyterian Church of the United States of America.” The result was to split the church into Old School (primarily mid-Atlantic and Southern churches) and New School divisions (primarily New York, New England and mid-west churches). The differences focused on theology, polity, and social reform (reflecting Presbyterian differences on slavery). This 32-year split ended in 1869 when the two factions reunited. In the intervening period, Southern churches had split from the Old School Presbyterian Church (USA) at the beginning of the Civil War.

On June 6, 1707, Francis Makemie stood trial in New York charged with preaching without a license. While technically admitting to preaching without a license, Makemie made an articulate plea for religious freedom — and the jury agreed. The case became a landmark in spreading religious freedom in the American colonies. Makemie was still charged court costs equivalent to $400 — a sum equal to multiple years of earnings for a working man of the time.

British troops involved in the battle at Springfield (New Jersey) had burned the Elizabethtown Presbyterian Church and parsonage. Having fled to the village of Connecticut Farms (now Union, NJ, about four miles from Elizabethtown), the minister's wife, Hannah Ogden Caldwell, was killed by a British soldier on June 7, 1780. Her cold-blooded killing incensed the American public. Her husband was the Rev. James Caldwell, chaplain to the Third Battalion of Company No. 1, New Jersey Volunteers. Known as the "fighting parson," he also was killed by a soldier on November 24,1781.

On June 8, 1898, the Rev. Dr. William C. Roberts officially took over as president of Centre College founded by Presbyterians in 1819 in Danville, Kentucky. When the Northern and Southern Presbyterian church split in 1861, they also fought over control of the college. In 1867, the courts ruled that the Northern branch had ownership. In 1873, Central University in Richmond, KY, was chartered to the Southern Presbyterian church. Under Dr. Roberts' administration, the two schools were merged on July 16, 1901, as the Centre College located in Danville.

On June 9, 1757, Rev. John Martin became the first Presbyterian minister ordained in the colony of Virginia. He studied theology with Rev. Samuel Davies, and was licensed by Hanover Presbytery on August 25, 1756. He served churches without a minister and was called to the Albermarle church on April 27, 1757. Reverend Martin was appointed to the Indian Mission on January 25, 1758, to the Cherokees. But with the Cherokees joining the French, the mission was abandoned. Martin settled in South Carolina.

On June 10, 1861, the Rev. Dr. Byron Sunderland was appointed chaplain of the U.S. Senate. Serving for three years during the Civil War, Rev. Sunderland was the pastor of First Presbyterian Church in Washington, DC, filling that pulpit for a total of 45 years.

On June 12, 1834, Presbyterian missionary Cutting Marsh started his travels across Wisconsin and into Iowa in order to visit the Sauk and Fox Indians, who had been relocated there after the end of the Black Hawk War. 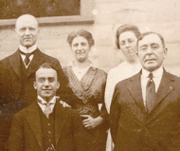 On June 17, 1859, John Wilbur Chapman was born in Richmond, Indiana. Graduating from Lane Seminary, Chapman was ordained as a Presbyterian minister and served in a couple of churches, including Bethany Presbyterian Church in Philadelphia, before beginning his evangelism tours. Helping Billy Sunday get started in evangelism, Rev. Dr. J. Wilbur Chapman was perhaps the leading evangelist at the turn of the 20th century. Former moderator in 1917 - 1918 for the Presbyterian Church (US) and author, Chapman was a summer resident of Montreat. Among his revival associates was the singer Charles M. Alexander. Taken in Montreat during their 1915 conference, the photo right shows (left to right back row): Charles M. Alexander and his wife (and hymn writer) Helen Cadbury Alexander; Mrs. J. W. (Mabel Moulton). In the front row (l to r) is pianist Henry Barraclough and J. W. Chapman. During the conference, Barraclough wrote the hymn "Ivory Palaces."

On June 19, 1859, Ashbel Green Simonton sailed from Baltimore to serve as the first missionary to Brazil with the Presbyterian Board of Foreign Missions. He arrived in Rio de Janeiro on August 12..

On June 19, 1910, the congregation of Centenary Presbyterian Church in Spokane, Washington, celebrated "Father's Day," at the suggestion of member Sonora Smart Dodd. The celebration would spread into a national observance..

On June 21, 1851, Lillias Horton was born. Educated as a physician, she went to Korea in 1888 as a Prebyterian medical missionary. In 1889, Dr. Horton married the Reverend Horace G. Underwood, who was the first U. S. Presbyterian minister in Korea. In 1908, she wrote an account of her first 15 years in Korea: "Fifteen Years Among the Top-Knots or Life in Korea."

On June 23, 1780, the Battle of Springfield (NJ) occurred. Two weeks earlier on June 7, the wife (Hannah Ogden Caldwell) of Rev. James Caldwell was shot and killed in a house apparently by a British soldier while she was with some of her children. This murder infuriated and aroused the rebellion in New Jersey and the other colonies. On June 23 at the Battle of Springfield, when his company ran out of paper wadding to load bullets for their rifles, Chaplain Caldwell reportedly dashed into the Springfield Presbyterian Church (established in 1745), scooped up as many Isaac Watts hymnals as he could carry, and distributed them to the troops, shouting "put Watts into them, boys."

On June 24, 1908, former President Grover Cleveland died in Princeton, NJ. A Presbyterian, Cleveland (shown in 1903) served as a trustee of Princeton University after his presidency.

On June 26, 1846, John S. Huyler was born. America's Candy King at the turn of the 20th century, Huyler helped fund the founding of Montreat and served as president of the Mountain Retreat Association from November 1899 to August 21, 1906. He turned Montreat over to the Presbyterian Church, forgiving half of the debt in 1910.

On June 26, 1892, Pearl Comfort Sydenstricker was born in West Virginia to Presbyterian missionary parents. Raised in China from age 3 months, Pearl married another China missionary, John L. Buck, and served as a Presbyterian missionary to China (1914 to 1933). In 1931, Pearl S. Buck published The Good Earth and won the Pulitzer Prize the following year. She was the first American woman to receive the Nobel Prize for literature in 1938.

On June 27, 1857, Presbyterian minister Elisha Mitchell (August 19, 1793 - June 27, 1857) died in a fall surveying the highest mountain peak in the East, just a few miles from what would become Montreat. In 1882 the U.S. Geological Survey confirmed the height and named the peak, Mt. Mitchell.
Ordained by the Presbytery of Orange (Hillsborough, NC) in 1821, the Rev. Dr. Mitchell taught mathematics, natural philosophy, geography and other subjects at the University of North Carolina, as well as preaching at the college's chapel.

On June 29, 1936, Congress approved a bill creating the Whitman National Monument — to honor the Presbyterian mission of Dr. Marcus and Narcissa Whitman to the Cayuse Indians in 1836 in what became the Oregon territory. The Whitmans were killed by the Native Americans in 1847 after an outbreak of measles was blamed on the missionaries. (Photo courtesy of National Parks Service).

On June 30, 1960, the Congo became an independent nation. The American Presbyterian Congo Mission (APCM) had prepared by appointment of a Church-Mission Committee composed of 25 Congolese Church leaders and ten missionaries, to work out the division of responsibilities to be carried by the Church (the Eglise Presbyterienne du Kasai), those to be handled by the Mission and those to be handled jointly by both bodies.
At this time, the APCM had 161 missionaries, the largest staff that it would ever have, with eleven stations scattered across the Kasai region providing the centers for evangelistic, educational and medical work. Within the situation of political instability that followed independence, the Church suffered serious disruption of its life and work. As one observer wrote: “Christians have been and are being subjected for the first time to large-scale persecution and testing, arising out of the necessity to make a choice between tribal loyalties and the atrocities often associated with them, and loyalty to Jesus Christ.” (Photo: signing of Congo independence, Library of Congress.).