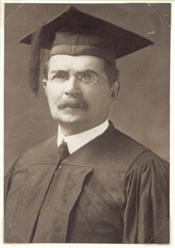 It was called the "Mountain Retreat" for the first few years of its existence. The founder was Rev. John C. Collins (Sept. 19, 1850 - Aug. 26, 1928), who previous Montreat histories only provided the information that he was a Congregationist minister from New Haven.

But John Chamberlain Collins also was an influential leader in the Christian social work of the later 19th Century.

Born in Albion, NY, on September 19, 1850, John C. Collins prepared for college at the State Normal school at Brockport, NY. He graduated from Yale in 1875, and from Yale Theological Seminary in 1878. While in school around 1876, Collins also worked as the superintendent at the Union Workers' Boys Club in New Haven.

After graduating from college, Collins considered several lines of Christian work before reaching a decision as to the particular branch to which he ought to devote his energies. He finally decided to undertake mission work in the city of New Haven, and was engaged in the capacity of general superintendent of the Gospel Union, a mission society in New Haven, supported by prominent Christian people of different denominations. The Union held gospel services in the center of the city, carried on a Sunday-school, worked among prisoners in police courts, and performed auxiliary work such as temperance programs. Collins would continued to work for the Gospel Union into the 20th century.

Collins undertook a landmark religious census in 1880 of the New Haven's citizens. 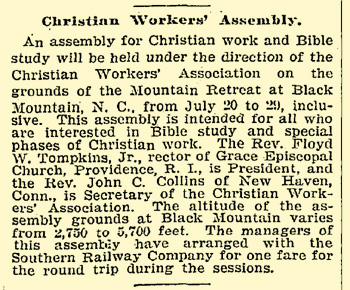 In 1884, Collins assumed running a Boys' Club in New Haven.

On June 2, 1886, Collins was ordained at the New Haven United Church as a Congregational minister. That same month in connection with Col. Geo. R. Clarke and nationally renown Evangelist Dwight L. Moody of Chicago, Ill., John C. Collins spoke at the first convention of Christian Workers in the United States and Canada. Collins revealed the results of his New Haven religious census and followup work.

In 1887, the Christian Workers’ Association authorized him to organize a program for street boys under their authority and subject to such rules as he might think advisable. By 1887, Reverend Collins had extended the Boys Club program into four states. The Boys Clubs consisted of opening rooms in the different cities during the evenings of the colder months of the year, supplied with instructive books and interesting games, for free to the boys. A Christian young man was placed in charge of the room as superintendent. During the day and summer months when the club was closed, the superintendent visited the homes of the boys, went to police court, and watched over those in legal trouble, having their cases continued and doing what could be done to help them.

The total number of boys under the supervision of the Collins' work reached perhaps about 13,000 boys by 1891.

Although there were several clubs for boys in existence before he started, Rev. John C. Collins effectively promoted and laid the groundwork to spread and permanently establish the Boys Club system, which today is known as the Boys & Girls Clubs of America.

The Mountain Retreat Association (MRA) was formed in March 1897 and the first summer program held in July 1897 (see the New York Times article, above right).

Collins served as president for the MRA. He promoted the conferences as part of the International Christian Workers' Association.

In the second year, the 1898 summer conference was led by the Rev. Reuben Archer Torrey of Chicago and Henry Burton Gibbud, who founded of the Florence Crittenden Home (now the Rescue Mission) on Bleeker St. in New York City. The meeting was again promoted by Collins in the New York Times (see above right) and other publications. 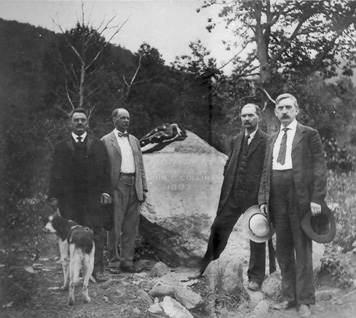 In 1898, Torrey headed the Chicago Evangelization Society, later named Moody Bible Institute, and Gibbud was serving on the faculty of the Bible Normal College in Springfield, Massachusetts.

In November 1899, Collins turned over the presidency of the Mountain Retreat Association to John S. Huyler, although Collins continued to serve on the MRA board of directors.

In New England, 53 boys clubs met in Boston in 1906 and created the Federated Boys Clubs, headquartered in Boston. That same year (1906), The Friends of Boys, Inc. established in New Haven. Rev. Collins was named national secretary, a position he held from 1906 to 1928.

June 3, 1908, The New York Times on transfer of Montreat to Presbyterian control (third from top).