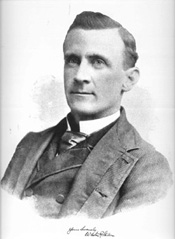 Born in Raleigh, NC, on May 15, 1855, Weston Raleigh Gales was the son of Major Seaton Gales, who was the last of the Gales to own and run the Raleigh Register newspaper.

In 1871, he left school when sixteen years old and worked for wholesale hardware dealers in New York City. He continued there until the mid-1870s, when he returned to North Carolina and became a clerk for the North Carolina General Assembly.

Gales apparently was elected by the North Carolina General Assembly to the office of Clerk of the Criminal Court of Wake County (circa 1877), which he held until, by a change in the judicial system, the court was abolished (1879). In 1878, Weston R. Gales married Anna Cowan Strong. Re-embarking on a business career, he worked for a tobacco company in Winston, NC, in 1880. Gales was a delegate to the annual convention of the Episcopal diocese in North Carolina during May 1881.

In the early 1880s, Gales moved to Cincinnati, Ohio, and worked for an insurance company.

In 1887, Gales was transferred to Peoria, IL, and worked for the Peoria District of the Prudential Insurance Company. By 1890, he had been placed in charge of the National Accident Association in Illinois.

During 1888 - 1891, Gales was an active member in Peoria of the Reformed Episcopal Church and Superintendent of Bacon Mission, established in 1888. The Bacon Mission sought to reach the unsaved. As one contemporary writer noted: "The life of the Mission and its success, is due to the Christian energy of those who are connected with the Bible Class of the church. Meetings are held bi-weekly, with a Sunday-school in connection therewith, and an industrial school in session except during the summer months."

After 1891, he moved to Virginia. Gales became a touring evangelist, but not an ordained minister. He remained a member of the Episcopal Church. He preached as an evangelist at a variety of places, including The University of Virginia (1896), The University of North Carolina (1901).

Gales served as a founding board member of the Mountain Retreat Association from 1897 to 1902. In 1899, Gales was appointed general manager of the Montreat operations and moved there. He also continued his evangelism meetings, for example, in 1900 holding meetings in Baltimore, Bristol (VA), Johnson City and Morristown (TN), as well as in Waynesville, Black Mountain and Charlotte (NC).

With foreign missionary work a priority topic during the late 1890s and early 1900s, MRA General Manager Weston R. Gales organized the first mission conference at Montreat in 1901, including many missionaries from the southern Presbyterian Church (U.S.) to China and Korea.

Shown are two immigration guards at Montreat during 1942 - 1943 for Axis diplomatic and businessmen families, while awaiting repatriation.