The building also served as a early library for the Montreat community. As Mary Martin noted in a January 1899 letter: "Dr. (Marianna) Holbrook and Miss Stone have the store in their own hands now and are gradually increasing the stock. Miss Stone has a circulating library in one corner of the store."

"Some of us were discussing the food supply in the store here," wrote Martin in a February 1899 letter, "and lamenting the lack of variety. Mrs. Salerno said the bill of fare reminded her of the boy who said he always had dried apples for breakfast, cold water for dinner, and let'em swell for supper."

A Montreat livery business (shown) was started to transport people to and from Black Mountain, as well as to rent horses for outing. The exact date of the opening of such a livery in Montreat was probably 1901, but could be earlier. Operated and owned by Rev. F. D. Rood, the livery stable was under a general store where Montreat's first post office was located (on lot 44-45, on what is now Assembly Drive directly across from Shenandoah Rd). An ad is seen at left in the 1902 Montreat brochure.

In 1900, John S. Huyler paid for and started the construction of Montreat's first hotel (see picture). The hotel was operated by W. D. Paxton. It opened in time for the 1901 summer conferences. Early advertising included the 1902 ad (below) in the Montreat promotional brochure, as well as in The Atlanta Constitution, June 29, 1902.

C. Whit. Gaskins & Co. (1902) — the firm opened a branch in Montreat in 1902 located next door to Cora Stone's The-Store-in-the-Grove. This establishment offered fresh meats and produce, as well as dairy products. The firm also had a luncheon counter for summer conferees. 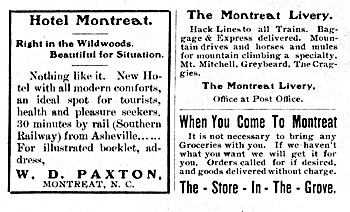 Rev. Francis D. Rood's General Store (c.1904 - 1907) — established a general store with his post office. Rev. Rood was the first postmaster of Montreat. His store was located on what is now Assembly Drive across from Shenandoah Road.

With the building of a new Post Office building, which opened on April 13, 1907, across from the community center (today's Post Office Building), the mercantile center shifted.

A new grocery store was built next to the Post Office building around 1908 that was owned and operated by Chester C. Lord. In 1914, the Mountain Retreat Association bought the general store.

Two new stores were added in Fall 1914. The new stores would house a drug store and a hairdressers.