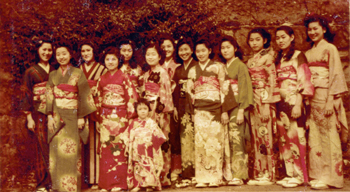 With the sudden involvement of the United States in World War II due to the bombing of Pearl Harbor on December 7, 1941, by the Japanese, military, diplomats and businessmen from both sides were caught in what were now enemy countries.

International protocol urged above average treatment of such diplomats, businessmen and their dependents while awaiting repatriation (exchange), as well as provisions for non-combatants to ensure their safety.

The Special War Problems Division of the U.S. State Department operated a small number of detention facilities during WW II – not to be confused with Japanese ad Japanese-American internment camps, generally out West run by the U.S. War Department.

"Special war problems" included diplomats, consular corps staff and their families, as well as a few executives of Axis-owned businesses located pre-war in the U.S. or in Latin American countries (Western hemisphere). These diplomats, businessmen and their 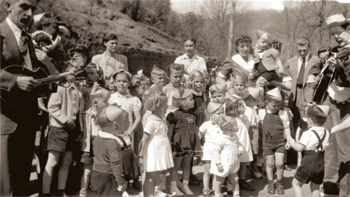 In the U.S., these Axis diplomats, businessmen and families were housed inland for short periods of time at Appalachian hotels and resorts, such as the Greenbrier Hotel, the Homestead, the Grove Park Inn, Ingleside Hotel, Shenvalee Hotel and Montreat's Assembly Inn. These diplomats and families began being transferred to these hotels on December 19, 1941. Everyday operations of these facilities were handled by the Immigration & Naturalization Service. One present-day author described the treatment afforded these diplomats and families as provided in "a regal manner... the United States hoped its diplomatic officials would receive similar treatment."

A State Department memorandum in 1942 reported that 785 people were interned in these hotels. Additional people were later added during 1943. Exchanges of diplomats, businessmen and families were made numerous times during 1942 - 1944 through neutral country ships at neutral ports. The U.S. used Swedish ships Drottningholm and the Gripsholm for repatriation on 33 voyages. The last detention hotel operated by the U.S. State Department closed on February 14, 1944. 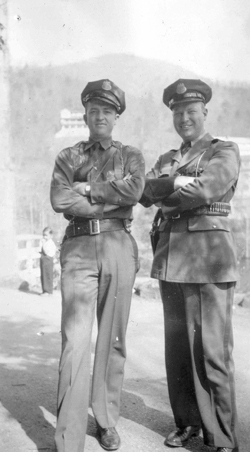 Montreat — Diplomatic Confinement
In October 1942, State Department officials requested that Montreat house businessmen, diplomats and families for a short period of time. The Montreat Retreat Association (MRA) agreed to house these civilians until April 1st (later extended to April 30), 1943, due to a planned General Assembly meetings planned for Montreat in May 1943 by the Presbyterian Church in the United States. On October 29, 1942, 264 businessmen, diplomats, wives and children were transported to Montreat.

The German contingent was housed on the two lower floors of Assembly Inn, with the Japanese women and children on the upper floor. There were NO bars or gates either on windows or in lobby.

The MRA placed a Japanese language New Testament or German-language Bible in the appropriate hotel rooms. The diplomats and dependents could exercise in the parking areas of Assembly Inn, and roam territory from the hotel to the lake, between the dam and the upper concrete bridge at the head of the lake.
At Christmas time, presents were provided by the MRA to the Japanese and German children — pay for by contributions from the Sunday School of the First Presbyterian Church of Spartanburg and others.

Reportedly at Christmas 1942, young people from Black Mountain gathered at the bridge and joined in singing Christmas carols — "Joy to the World" and "Holy Night" — with the families. All businessmen, diplomats, wives and children were transferred from Montreat on April 30, 1943.

From the State Department revenues received by the MRA, $25,000 was held in reserve and used when the Historical Foundation building (Spence Hall) was constructed in 1954.

Grove Park Inn (Asheville, NC)
April 3, 1942 - September/October 1942
63 Japanese and 155 German diplomats, businessmen and families, some who were serving at posts in Latin American countries at the beginning of the war with the United States.

Photo captions - a rare color photo of some of the Japanese teenagers and a younger child in kimonos for a special occasion while they were in Montreat at the State Department Detention Camp for diplomats' and businessmen's families, while waiting for repatriation to Japan. Repatriation didn't occur for all before the war ended. Left-to-right are: Michiko Okaji, Shizuko Carolyn Fujisawa, Shigeko Okaji, Taeko Carol Miyamoto,  Kiyoko June Kiyohara, Miyeko Ella Ohta, Michiko Jane Asami, Sugako Isobe, Toshiko Marianne Matsumura, Nobuko Saito, Sumie Betty Ohta, Mariko Mary Kojima and Satoko Isobe. The young girl in front is not identified. Some of these individuals had resided in Hawaii before the outbreak of the war.

German and Axis businessman and diplomat families enjoy a guitar player (far right) at a small party on Assembly Drive near Lake Susan.

Shown are two immigration guards at Montreat during 1942 - 1943 for Axis diplomatic and businessmen families, while awaiting repatriation.