On Nov. 1, 1909, the Church and Labor Department of the American Board of Home Missions of the Presbyterian Church announced church services for performers in the New York City vaudeville theatres, since the theatrical troupes couldn't attend mid-week services. The first service was held on Wednesday night, Nov. 3, at the 2,070 seat American Theatre on 42nd Street, as soon as the curtain fell on the last act.

On November 2, 1953, a "Letter to Presbyterians" was mailed to presbyteries and sessions. Simultaneously, a press release was issued and copies sent to President Dwight Eisenhower and Secretary of State John Foster Dulles — both Presbyterians — and Presbyterian members of Congress. Issued by the General Council of the Presbyterian Church (USA) by Moderator John A. Mackay (shown in painting below from Princeton Theological Seminary), the letter was the strongest denominational refutation of McCarthyism to date. The letter read in part: "... treason and dissent are being confused. The shrine of conscience and private judgment, which God alone has a right to enter, is being invaded. Attacks are being made upon citizens of integrity and social passion which are utterly alien to the Protestant religious tradition which has been a main source of the freedoms which people of the United States enjoy." Reverend Mackay served as President of Princeton Theological Seminary for 23 years (1936 - 1959).

On Nov. 3, 1723, renown American Presbyterian preacher Samuel Davies was born in New Castle County, Delaware. He was sent to Virginia and the South to establish churches. He was the first to send missionaries to the Cherokees in 1757-1759. Davies became known as "The Apostle of Virginia."

n 1751 at age 28, Rev. Davies embarked on a trip to Great Britain and Ireland to raise money to build Nassau Hall (see drawing left) and a house for the president of the College of New Jersey (now Princeton), as well as a charitable fund “for the education of pious and indigent youth.” In 1758, Rev. Davies was elected to succeed Jonathan Edwards as president of the College of New Jersey, but he declined, reluctant to quit his pastoral work in Virginia. He was eventually persuaded to accept and he assumed the presidency on July 26, 1759. He died in March 4, 1761, in Princeton.

On Nov. 6, 1935, famed evangelist and former baseball player Rev. Billy Sunday died. Sunday (shown right) was ordained a minister on April 15, 1903, by the Presbytery of Chicago at the Jefferson Park Presbyterian Church. After completing his major league baseball career (1883 - 1890) with the Chicago White Stockings, the Pittsburgh Alleghenies and the Philadelphia Phillies, Sunday joined the staff of the Young Men's Christian Association. In 1893, Billy Sunday joined as an assistant to Presbyterian Evangelist Rev. John Wilbur Chapman, who also was elected moderator in May 1917 of the General Assembly of the Presbyterian Church (USA). When Chapman stopped traveling in 1895 to assume a pastorate, Sunday launched his solo career as an evangelist in 1896. Billy Sunday first rose to national prominence in 1907.

On November 7, 1837, a mob murdered Presbyterian minister and abolitionist newspaper editor Elijah Parish Lovejoy (Nov. 9, 1802 - Nov. 7, 1837) in Alton, Illinois, while he was defending his printing press. Lovejoy went to Princeton Theological Seminary in 1832 and was ordained on April 18, 1833, by the Second Presbytery of Philadelphia.

On November 9, 1839, the Board of Trustees of Hanover College, a Presbyterian school opened on Jan. 1, 1827 by Rev. John Finley Crowe (shown with his wife Esther), voted to accepted a proposal by the Presbyterian Synod of Indiana to adopt the school — provided a theological department was established. The Indiana Theological Seminary was formally opened on Nov. 1, 1831. On April 5, 1841, the Seminary moved to New Albany, Ind., and then in 1859, it moved to Chicago where it is now the McCormick Theological Seminary. Hanover College is the oldest private college in Indiana.

On November 10, 1808, Presbyterian minister Robert Elliot was appointed chaplain of the U.S. Senate. Reverend Elliot has previously served as chaplain to the U.S. House of Representatives on Dec. 1, 1806. He also was the principal of the Eastern Academy school on Capitol Hill in the Washington, D.C., which opened on May 19, 1806. Rev. Elliot arrived in D.C. from Strasburg, Pennsylvania.

On Nov. 11, 1929, Time Magazine noted in an article entitled "Pastoresses?": "If grim old John Knox ever turned in his grave, last week he turned again. For no less Presbyterian a person than Dr. Cleland Boyd McAfee, Moderator of the Presbyterian General Assembly, wrote with at least an open mind to his 10,000 pastors on the question of admitting women to preach and hold high office in the Presbyterian Church."

On Nov. 12, 1701, the Carolina Assembly passed the Vestry Act of 1701, making the Church of England the official religion of the Carolina colony. Active opposition by Quakers, Presbyterians and other religious Nonconformists, who lived there, ultimately convinced the proprietors of the colony to revoke the act in 1703. 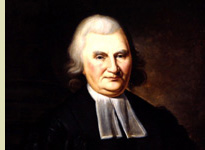 On Nov. 16, 1839, a letter was published in The Presbyterian rebutting criticism of the American Board of Commissioners for Foreign Missions sending wives with missionaries to the Far East. The writer (initials S. C.) argued that wives could be a teacher to "heathen children" and work "for an extension of that system which has done so much for her."

On November 17, 1831, the Cumberland Presbyterian Church's Columbia Synod published a paper resulting from its recent (Nov. 4) meeting in Pulaski, Tennessee, the list of organizing members for the new Mississippi Presbytery. The original members of the Cumberland's Mississippi Presbytery were Thomas J. Bryan, Robert Molloy, Samuel W. Sparks and Isaac Shook — who were to first meet on the fourth Thursday in April 1832 in Gallatin, Miss.

On November 18, 1820, 22-year-old Presbyterian minister John Nicholson Campbell was named chaplain of the U.S. House of Representatives. Rev. Campbell was born in Philadelphia, Pennsylvania, on March 4, 1798, and died in Albany, New York, on March 27, 1864. Reverend Campbell served as pastor of Second Presbyterian Church in Washington, DC, where Presidents John Quincy Adams and Andrew Jackson, as well as Vice President John C. Calhoun, worshipped in the 1820s. He also was active in the American Colonization society, In 1830, Rev. Campbell and others were accused by Peggy Eaton of repeating the rumour that before her marriage, she dined with John Eaton in Philadelphia without a chaperone. Appointed Secretary of War by Jackson, John Eaton and his wife became a social controversy. As the social snubbing and other issues divided politicians, President Jackson's entire cabinet resigned, Vice President Calhoun resigned and Reverend Campbell stepped down from his pulpit. In 1831, he was called to the First Presbyterian Church in Albany, New York, and remained there until his death.

On Nov. 19, 1863, President Abraham Lincoln arrived in Gettysburg that morning and delivered his famous, short remarks at a dedication ceremony of the Soldiers' National Cemetery on the battle field. At five o'clock in the afternoon, Lincoln attended a patriotic meeting in the Gettysburg Presbyterian Church. He heard a speech by life-long Presbyterian Charles Anderson, Lieutenant Governor, and later Governor, of Ohio, as well as the brother of Robert Anderson of Fort Sumter fame. One hundred years later, former President and Mrs. Dwight D. Eisenhower became members of the church.

On Nov. 19, 1928, Mary Behner, a Presbyterian mission worker and daughter of a Presbyterian minister, arrived in the 9-mile coal field hollow of Scotts Run, West Virginia, where she would serve until 1937. Working for the Board of National Missions of the Presbyterian Church, U. S. A., Behner went far beyond her initial task of setting up a Sunday School on behalf of Morgantown's First Presbyterian Church. She set up "The Shack," a community center, libraries, vacation Bible schools, charm schools, nursery schools, scout troops, and Christian Endeavor societies. She helped feed children during the Depression. 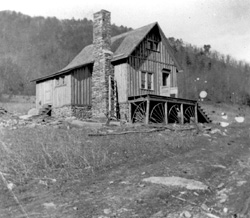 On Nov. 22, 1898, Mary R. Martin arrived at her new home (one of the first) in Montreat — Chinquapin Lodge, below, which is still standing. She married James I. Miller and served as a teacher (1916 - 1935) at Montreat Normal School and College.

On November 23, 1817, the Rev. Salmon Giddings founded the first on-going Presbyterian church in St. Louis with nine members in the congregation.

The Presbyterian Rev. James Caldwell, chaplain to the Third Battalion of Company No. 1, New Jersey Volunteers — Known as the "fighting parson" during the Revolutionary War — was killed by a soldier on November 24, 1781. Also see June 7, 1780 entry.

On November 25, 1866, the Rev. David McFarland held the first Presbyterian service in the Council Chambers of the Palace of the Governors in Santa Fe with 40 present, including the Territorial Governor's wife, Mrs. Jennie Mitchell. On December 10, 1866, he opened a school with ten scholars.

On Nov. 26, 1920, Ohio State Day was celebrated for raising funds to build the university's new stadium (right, completed in 1921) and for the accomplishments of William Oxley Thompson (1855 - 1933), a Presbyterian minister and Ohio State president since 1899. 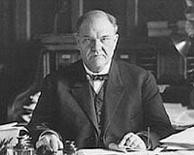 On Nov. 29, 1847, Presbyterian Elder and Missionary physician Marcus Whitman, his wife Narcissa Prentiss Whitman, and 12 others were killed by Indians in Washington's Walla Walla valley. Whitman had recently returned from a 3,000-mile journey to convince the American Board of Commissioners for Foreign Missions not to close down one of his three mission stations. He was successful, and returned with a fresh group of immigrants—and the measles virus. Many Indians died of the disease, some because Whitman gave them vaccinations. The Indians accused Whitman and other missionaries of black magic and murdered them.

On Nov. 30, 1846, Canadian Presbyterian missionary the Rev. Dr. John Geddie (shown) and his family sailed for New Hebrides Islands in the South Pacific. Born in Scotland, Geddie died in 1872. His memorial tablet reads: "When he landed in 1848, there were no Christians here, and when he left in 1872 there were no heathen.".