On October 1, 1912, the Texas-Mexican Industrial Institute in Kingsville, Texas, opened with 50 boys of Mexican descent and led by the Rev. James W. Skinner, president from 1912 - 1931. The school was approved by the Presbyterian Synod of Texas in 1910. In 1956, the school merged with the Presbyterian School for Mexican Girls (opened in October 1924) to form the Presbyterian Pan American School.

On October 3, 1755, the Presbytery of Hanover in Virginia was formed by six Presbyterian ministers. Samuel Davies, John Todd, Alexander Craighead, Robert Henry, John Wright and John Brown organized the presbytery (now the Presbytery of the James), which was recognized by The Synod of New York as extending into the Deep South and westward to the frontiers. Reverend Davies preached the opening sermon of the new body. The first order of business was to set aside a day of fasting and a call to arms because of the outbreak of the French and Indian War (1755-1763).

On October 4, 1870, Oglethorpe College was reopened in Atlanta, Georgia, by the Presbyterian Synod of Georgia. Originally founded in 1835 in Midway, about 2.5 miles from Milledgeville, Oglethorpe College was housed in its main building and in Thalian Hall, constructed in 1859. The Presbyterian college operated from 1835 to 1862, when it was closed because of the Civil War. It reopened in Atlanta in 1870 with five professors, plus three teachers in its prep high school and six instructors for its law school, but was closed less than 2 years later. Today's namesake (Oglethorpe University) was created in 1913 as a non-denominational school.

On October 5, 1699, Rev. Francis Makemie appeared at the Accomac County court to request a license to preach and hold religious meetings in Virginia as a Presbyterian at his houses in Pocomoke and Onancock. Previously, he had preached and organized churches in Maryland and Delaware, as well as holding services in Virginia. The official church in Virginia was the (Episcopal) Church of England. Passage of the Act of Toleration by the English Parliament in 1689 gave new rights to religious dissenters, allowing them to register their meeting houses and license their ministers to preach. In 1699, Makemie got Virginia to accord similar freedom. The court gave him a license on October 15, 1699. 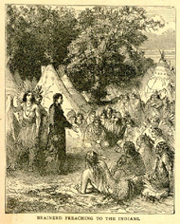 On October 5, 1744, Presbyterian David Brainerd begins missionary work with Native Americans along New Jersey's Susquehanna River (see Victorian idealization of event in the image at right ). Brainerd had been kicked out of Yale for criticizing a tutor and attending a forbidden revival meeting (of "The Great Awakening").

On October 6, 1815, the Presbytery of West Tennessee petitioned the Synod of Kentucky to create a new Presbytery of Mississippi. The request was approved on October 15, 1815, and the Mississippi Presbytery conducted its first meeting on March 6, 1816.

On October 7, 1747, a founder and the first president of the College of New Jersey (now Princeton University), Presbyterian Minister Jonathan Dickenson died.

On October 7, 1835, Presbyterian Rev. Peter H. Fullenwider (shown) applied for a land grant from the State of Coahulia and Texas. Reverend Fullenwider was ordained and apparently the first protestant minister to move into the Mexican territory of Texas (in Spring 1834), despite Spanish statutes prohibiting such ministers and protestant church services. He was commissioned by General Sam Houston during the Texas War of Independence to help conduct families to safety. On July 26, 1837, the Executive Committee of the Synod of Mississippi appointed Reverend Fullenwider to “labor for three months in Texas as a Missionary.” He also was the first Presbyterian missionary in Texas, appointed by the Mississippi Presbytery. He later returned to Mississippi.

The first Presbyterian missionary to Native Americans in the American colonies, David Brainerd died at Northhampton, Massachusetts, of an illness.

n "October 11, 1880: The College of Clinton, to be under Presbyterian influence and control, was organized today." noted the session minutes of Clinton Presbyterian Church (now First Presbyterian Church of Clinton). The church's pastor, Rev. Dr. William Plumer Jacobs (shown) later wrote: "It was with a little degree of surprise at our own audacity and of amusement on the part of the town people that we made an announcement of what we had done upon the streets. Nevertheless, it took well from that day till this." Reverend Jacobs also founded the nearby Thornwell Home and School for Boys and Girls. The College of Clinton was renamed Presbyterian College.

On October 13, 1849, Austin College was founded in Huntsville, Texas, by Presbyterian circuit-riding minister, Rev. Dr. Daniel Baker (shown), who helped organize the first presbytery in Texas in 1840. The college moved to Sherman in 1876 and became co-educational in 1918. In 1930, the college merged with the all-female Texas Presbyterian College.

On October 14, 1967, former President Eisenhower laid the cornerstone of the National Presbyterian Church's then new church, which opened on September 7, 1969.

On October 15, Rehoboth Church (in Rehobeth, MD) celebrates its church building's anniversary — the building was constructed in 1706 by Rev. Francis Makemie, whose efforts often led to him being called "Father of American Presbyterianism."

On October 16, 1930, the Wrangell Presbyterian Church, the first built in Alaska in 1879, was destroyed by fire.

On October 17, 1927, Time Magazine highlighted the Presbyterian attitudes toward divorce: "Presbyterian rule has held that only desertion and adultery are legitimate grounds for divorce. In this Presbyterians have been more liberal than most Christian denominations. Most admit only adultery as a divorce cause. A Presbyterian minister might properly marry a divorce only if the person were the innocent derelict of desertion or the innocent cheat of adultery. And, because the minister has had free discretion to judge marital innocence, amiable pew-holders occasionally have tried to strain his goodwill."

On October 18, 1685, French King Louis XIV revoked the Edict of Nantes, which had passed in 1598 to protect the Protestant Huguenots who were a tolerated minority in France. More than a quarter million French Protestants immigrated to America, Prussia, Holland or England. Huguenot churches in America later merged or affiliated with other Protestant denominations, such the Presbyterian Church (USA), Episcopal Church and others. 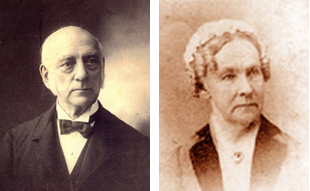 On October 18, 1859, the first American Presbyterian missionaries arrived in Japan. “A ship sailed into the Bay of Yedo. On board, a man and his wife knelt to pray. They knew not whether they would be allowed to land in Japan; nor if allowed, what fate might await them. But they prayed – that in some way a home might be provided for them in this strange land, and that God would guide them in the stupendous task which they were about to undertake. These two were Dr. and Mrs. James Curtis Hepburn, the first Presbyterian missionaries and among the first Protestant missionaries to set foot on the soil of Japan.” (Until the Day Dawn, James A. Cogswell, p. 3) Dr. Hepburn, a former missionary to China, gave 33 years of service to Japan. His versatility as physician, linguist, educator and church builder made him one of the most venerated of all the early missionaries.

On October 19, 1893, Presbyterian Missionary to China Rev. John Livingston Nevius died. Nevius (March 4, 1829 - Oct. 19, 1893) promoted the strategy that missions should work to establish self-propagating, self-supporting, self-governing indigenous churches from the very beginning. The theory also was espused in slightly different form by Henry Venn and Rufus Anderson. Nevius (shown at right) was very influential in getting the theory put into practice by the Presbyterian missions to Korea. Nevius articulated this mission concept in the Chinese Recorder journal during 1885 and published a book — The Planting and Development of Missionary Churches — in 1886. He served in China from 1854 till his death.

The Malibu Presbyterian Church (PCUSA) was destroyed in the California wild fires on Sunday, Oct. 21, 2007.

On October 22, 1746, a Royal Charter was granted to create the College of New Jersey (now Princeton University). Organized by Presbyterian ministers, the College (shown in a 1764 drawing) opened in 1747 in Elizabethtown, NJ, before moving to Newark and then finally to Princeton.

On October 25, 1900, the last missionary death occurred during the Boxer Rebellion. More than 130 missionaries were killed in the year-long uprising. The slain missionaries came from all denominations and became known as the China Martyrs of 1900. On June 30th, The American Presbyterian Mission lost Rev. & Mrs. Frank E. S. Simcox and their three children; Dr. and Mrs. C. V. R. Hodge; Dr. G. Y. Taylor. Click picture or list to see larger image and more information.

On October 27, 1781, the New Jersey Revolutionary Governor, Council, Assembly and citizens processed to the Presbyterian Church in Trenton to celebrate the news of surrender by Lord Cornwallis to the American forces. Presbyterian Reverend Elihu Spencer delivered the address. During the mid-1760s, Dr. Spencer had traveled to North Carolina to help organize Presbyterian churches throughout the state.

On October 28, 1858, Rev. Elymas Payson Rogers (1815 - 1861) of the Plane Street Presbyterian Church of Newark, N.J., made a successful motion at the Second Presbyterian and Congregational Convention (of black clergy, elders and deacons), which met at Central Presbyterian Church in Philadelphia. Concerning the recent Dred Scott decision (March 6, 1857), the motion read: "…it was Resolved, That the recent decision of the Supreme Court of the United States in the case of Dred Scott, the evident design of which is, to degrade and rob the free people of color of civil and political rights, to perpetuate Slavery, and dishearten true philanthropy in the United States: is alike a sin against God, and a crime against humanity; and that Judges Curtis and McLean, who dissented from the infamous decision, are worthy of all praise." A third-generation descendant of an 18th century slave in Connecticut, Reverend E. P. Rogers served black congregations in Trenton, Princeton and Newark for 19 years. A noted poet during the 1850s, Rev. Rogers was active in the African Civilization Society (founded in 1858) and traveled to Sierre Leone as a missionary in 1860, dying there in 1861.

On Oct. 29, 1741, Alexander McDowell was ordained and sent to Virginia as an evangelist for Presbyterians (1741 - 1743). A notice in the Pennsylvania Gazette of June 4, 1752, reported that the Free-School of Rev. Francis Alison was "now continued, by the Appointment of the Synod of Philadelphia, under the Care of the Rev. Alexander McDowell, between the Branches of Elk-River" and would "be opened the 25th of this Month, where Latin, Greek, Hebrew, and several Branches of Philosophy, will be carefully taught." This school would eventually become the University of Delaware.

On October 29, 1942, 268 German and Japanese diplomats, wives and children were transported to Montreat to await repatriation to their countries, in exchange for American diplomats, families and missionaries trapped in enemy countries when World War II broke out.