Born in 1509 in Noyon, France, Jean Cauvin was the son of a secretary to the local bishop. Around 1520 or 1521, he was sent to Paris for his education and where he eventually studied law. 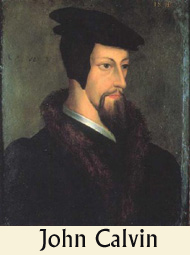 In 1532 or 1533, Calvin was influenced by the writings of Martin Luther and became a Protestant. Accused of writing an academic discourse for his friend Nicolas Cop that was too “Lutheran,” Calvin fled Paris in 1533.

He started writing his Institutio religionis christianae in Angouleme in 1534, completing and publishing the work in Basle in 1536. The work was originally written in Latin.

Under the urging of Guillaume Farel (1489 - 1565), John Calvin settled in Geneva where the city-state had recently accepted the Reformation. Calvin and Farel were exiled from Geneva in 1538, but Calvin was invited back to Geneva in September 1541. Also in 1541, the Institutes are translated into French.

Ecclesiastical Ordinances were written in late 1541 by Calvin and helped establish the operational structure of the church and its relationship to a city/state political entity.

Calvin published numerous Biblical Commentaries which establish his influence and fame as a leading Reformation interpreter of the Bible. While there were challenges from within Geneva and among other Reformation writers, the public perception that Calvin was the staunch defender of the Reformed Church increased in the 1550s.

In 1556, former priest John Knox came to Geneva and worked with others to translate the Bible into English. After working with Calvin, Knox returned to Scotland in 1559 and launched a successful Scottish Reformation which established Presbyterianism as the Kirk of Scotland.

In 1559, Calvin founded the Academy (now University) of Geneva. Recognized as one of the key leaders in the Reformed Church, Calvin died on May 27, 1564.

John Knox was born sometime in 1514 or 1515. He first appears in public records as a priest and a notary in 1540. During 1544, George Wishart travelled throughout Scotland preaching in favor of the reformation and when he arrived in East Lothian, Knox became an associate and his bodyguard carrying a two-handed sword. Wishart was seized in December 1545 and executed for his faith on March 1, 1546. 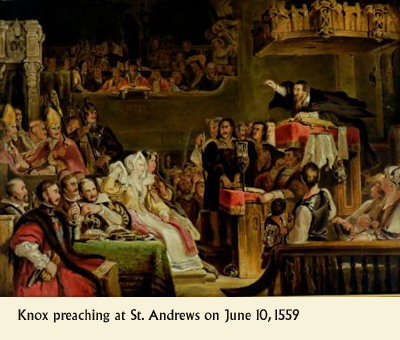 Protestant rebels captured St. Andrews Castle and Knox joined them, becoming their reluctant preacher. Knox was later captured when the castle fell and spent 19 months chained to an oar in a French galley.

Between 1549 and 1559, John Knox traveled around Europe, from Geneva to Frankfurt to Scotland. From 1556 to 1559, Knox preached in Geneva to the English-speaking Protestants — sometimes three sermons a week. He returned to Scotland in 1559.

On August 1, 1560, the Scottish Parliament met to settle religious issues. Knox and five other ministers were called upon to draw up a new confession of faith. Within four days, the Scots Confession was presented to Parliament, voted upon, and approved. A week later, the Parliament passed three acts in one day:
the first abolished the jurisdiction of the pope in Scotland,
the second condemned all doctrine and practice contrary to the reformed faith, and the third forbade the celebration of Mass in Scotland.

Before the dissolution of Parliament, Knox and the other ministers were given the task of organizing the newly reformed church or the Kirk. They would work for several months on the Book of Discipline, the document describing the organization of the new church.

Parliament reconvened on January 15, 1561, to consider the Book of Discipline. The Kirk was to be run on democratic lines. Each congregation was free to choose or reject their own pastor; but once he was chosen, they could not fire him.

The Scottish Kirk was set up with Presbyterial organization. Knox set priorities for the Kirk in caring for the poor and in educating all to read so they could read the Bible (the new 1560 Geneva Bible in English).

Presbyterianism would grow and expand to the American colonies with the Scot and Scot-Irish immigration during the late 1600s and 1700s.