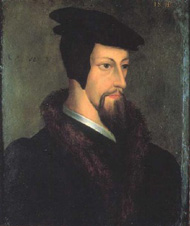 On September 1, 1536, 27-year-old John Calvin (Jean Cauvin, July 10, 1509 - May 27, 1564) preached his first sermon in Geneva at St. Peter's Cathedral. Reportedly a sermon on the leters of Paul, Calvin's preaching was immediately noted in the town council's minutes of Sept. 5th. Earlier in 1536, Calvin (shown in a painting) had published his Institutes of the Christian Religion, a work destined to expand the momentum of the Reformation.

On September 3, 1939, evangelist William Edward Biederwolf died. Trained at Princeton Univiersity and the Princeton Theological Seminary, Presbyterian minister Biederwolf served at the Broadway Presbyterian Church in Loganport, Indiana, in 1897, before joining in 1898 the 131st Indiana Volunteer Regiment of the 13th Calvary. He served as chaplain to this group during the Spanish-American War. He would become one of outstanding Presbyterian evangelists in the early decades of the 20th century, leading three worldwide evangelism tours. He served for 20 years as director of the Winona Lake Bible Conference, as well as organizing the Winona Lake School of Theology. Biederwolf was born on September 27, 1867.

On September 5, 1889, the Philadelphia North Presbytery sponsored a 160th anniversary celebrating the construction around 1730 of a theological school building by Rev. William Tennent near what is now Warminster, Pennsylvania. It was the first college in Pennsylvania and the first short-lived theological seminary (up to 1746) in the American colonies. Religious courses were begun by Reverend Willian Tennent during the mid-1720s in his home or church. Known as the "Log College," the structure was celebrated by U.S. President Benjamin Harrison, a practicing Presbyterian, and up to 12,000 people.

n September 7, 1891, the Arkansas Cumberland (Presbyterian) College (shown) opened in Clarksville, AR. This college succeeded the Cain Hill College, which was closed at that time. In 1920, the school was renamed the College of the Ozarks, and in 1983 was titled the University of the Ozarks. 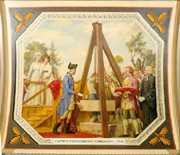 On September 8, 1793, Presbyterian Rev. Dr. James Muir of the Old Presbyterian Meeting House (from 1789 - 1820), helped in the laying ceremony of the cornerstone of the new U. S. Capitol being built in Washington, D.C. (The photo at right is provided courtesy of the Architect of the Capitol).

On September 9, 1709, Rev. Jonathan Dickinson was ordained at Elizabethtown, Colony of New Jersey. Reverend Dickinson would help found the College of New Jersey (now Princeton University) in 1746 and would serve as its first President in 1747.

On September 11, 1735, the Rev. William Tennent purchased a tract of land near Neshaminy, Pennsylvania, where the "Log College" seminary building was located. Conducted earlier in a home or church, this school is considered by some as the first theological educational training center in Ameria. His son, the Rev. Gilbert Tennent sold the property on February 28, 1746. 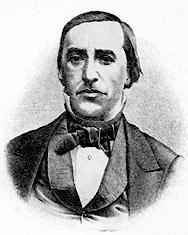 On September 12, 1818, George Duffield Jr. (drawing at right) was born in Carlisle, Pennsylvania. He graduated at Yale College and the Union Theological Seminary, New York. He was a Presbyterian minister serving many churches, as well as a hymn composer. His most popular hymn is Stand Up, Stand Up for Jesus. Rev. Dr. Duffield gave the hymn manuscript in 1858 to his Sunday School Superintendent, who published it on a small handbill for the children. It became widely distributed through subsequent hymn books.

On September 13, 1541, Reformation leader John Calvin returned to Geneva, after being recalled by the local officials. He would stay there the rest of his life. He brought back with him a revised Order of Worship and the Strasbourg Psalm book.

On September 14, 1985, Rev. Benjamin Weir (shown at right), a Presbyterian clergyman and missionary, was released after being kidnapped in Beirut on May 8, 1984, by members of a Palestine terrorist organization. In 1986, he was elected moderator of the 198th General Assembly of the Presbyterian Church in the United States of America.

On September 15, 1748, members of a recently organized church in Newburyport, Massachusetts, petitioned to join the Presbytery of Boston and organize as "after the manner of the Kirk of Scotland" — The Presbyterian Society and Church. The pastor for this First Presbyterian Church of Newburyport was Rev. Jonathan Parsons of Lyme, Connecticut, who was influenced and mentored by the evangelist Rev. George Whitefield (shown at right). On September 30, 1770, Whitefield, who helped create the Great Awakening in America and influenced many New Side Presbyterian ministers, died at Parson's manse in Newburyport.

On September 16, 1958,the Florida Legislature granted the charter for Florida Presbyterian College, later renamed Eckerd College, and the Presbyterian synods appoint a board of trustees.

On September 17, 1717, the first meeting of America's first General Synod was held. The preceding year, September 20, 1716, the General Presbytery (of Philadelphia) had split into four new Presbyteries — Philadelphia, New Castle, Snow Hill and Long Island — that would meet once a year at a Synod meeting. 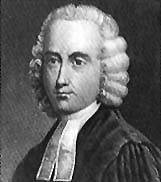 On September 19, 1722, the Rev. Jonathan Dickinson preached a sermon to open the Synod meeting at Philadelphia — "Wherein is Considered the Character of the Man of God, and his Furniture for the Exercise both of Doctrine and Discipline, With the True Boundaries of the Church's Power." Rev. Dickinson lead his church in Elizabethtown, New Jersey, to join the Presbyterian denomination in 1717. He would go on to be highly influential in the early America church and served as the first president of the College of New Jersey (now Princeton University).

On September 20, 1716, the first Presbytery in America split into four new Presbyteries — Philadelphia, New Castle, Snow Hill and Long Island — that would gather once a year beginning in 1717 at the first American Presbyterian Synod meeting.

n September 21, 1766, Presbyterian ministers Charles Beatty and George Duffield (1732 - 1790, shown at right) preached to a group of Native Americans at a site near present day Newcomerstown, Ohio, on the Tuscarawas River. The two Pennsylvania ministers were scouting the Northwest Territory (Ohio) for possible missions.

On September 21, 1904, Davis & Elkins College (Elkins, WV) held its first classes with 35 students enrolled for the first term. The college was founded by United States Senators Stephen B. Elkins and Henry Gassaway Davis and the Presbyterian Church. Joseph E. Hodgson served as the first president of the combined College and Academy.

On September 22, 1961, St. Andrews Presbyterian College opened its doors in Laurinburg, NC. The previous year on September 23, 1960, the colege's board of directors had named the college, which was the result of a merger of Flora MacDonald College and Presbyterian Junior College.

On September 23, 1860, Presbyterian minister and Hawaiian missionary Richard Armstrong died. He arrived in Maui in 1831.

On September 25, 1866, Rev. Cleland Boyd McAfee was born in Missouri. For 20 years, he served as professor, chaplain and choir director at Park College. He also served churches in Chicago and Brooklyn, as well as on the faculty of McCormick Theological Seminary (1912 - 1930) and as director of the Presbyterian Board of Foreign Missions (1930 - 1936). He died in 1944. In 1903, he wrote the hymn, Near to the Heart of God.

On September 26, 1759, Presbyterian Rev. Samuel Davies was inaugurated as President of the College of New Jersey (now Princeton University).

On September 27, 1867, Presbyterian evangelist William Edward Biederwolf was born. He served at the Broadway Presbyterian Church in Loganport, Indiana, in 1897, before joining in 1898 the 131st Indiana Volunteer Regiment of the 13th Calvary, where he served as chaplain during the Spanish-American War. He would become one of outstanding Presbyterian evangelists in the early decades of the 20th century.

On September 29, 1775, the Rev. Dr. David McConaughy (right) was born at Menellen, Pennsylvania. McConaughy graduated from Dickinson College and was ordained on October 5, 1797 as a Presbyterian minister by the New Castle Presbytery. Serving as a traveling minister for a while, he became pastor of the congregation at Upper Marsh Creek (outside of Gettsyburg, PA) in October 1800. In 1813, the church moved into Gettysburg and is now the Gettysburg Presbyterian Church. After serving as the head of the Gettsyburg Academy school from about 1820 to 1825, Rev. McConaughy became president of Washington College in Washington, PA, on Dec. 21, 1831. He served until 1849 and died on Jan. 29, 1852.