Born in Salisburyville, Pennsylvania, on October 6, 1866, Alexander Jeffrey McKelway was born to the Presbyterian minister John Ryan McKelway and the schoolteacher Catherine McKelway. His father passed away when he was only four years old, and so Mrs. McKelway and her two sons moved into the home of Catherine’s father, David Comfort, in Charlotte County, Virginia. 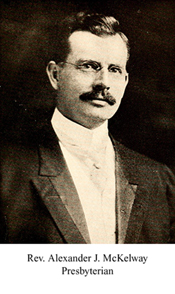 Alexander attended Hampden-Sydney College, also in Virginia, graduating in 1886. After teaching for a little while in both Georgia and Virginia, he entered Union Theological Seminary in Virginia, graduating in 1891. That same year, he was also ordained by the Albemarle Presbytery in North Carolina and wedded to Lavinia Rutherford Smith, the daughter of one of his professors at Union Theological Seminary.

Though he began pastoring in Smithfield, North Carolina, he soon became the minister of First Presbyterian Church in Fayetteville, where he encountered the working conditions in cotton mills. A major contributor to the conditions was alcohol abuse, and so McKelway led the charge in proposing stricter liquor regulation on a national scale.

On account of his concern for the well-being of the workers, McKelway was placed in charge of home missions in the Synod of North Carolina. He also wrote on church history, which became published in what would become the Presbyterian Standard, and in 1898 was made the journal’s editor. This prompted he and his family to move to Charlotte, where the Standard was published.

It was from the platform of the Presbyterian Standard that McKelway began to call for reformation in multiple rungs of society. However, his primary focus was child labour. Using the Standard, McKelway published multiple editorials declaiming the extensive hours the children were forced to work for and the hazardous environments in which they labored. In 1900, Davidson College gave him an honorary doctor of divinity for his call for social reform.

In 1903, he was made the editor of the Charlotte News, allowing him greater influence and encouraging him to work for social reform not just in North Carolina, but the South as a whole.

The National Child Labor Committee was created in 1904 by McKelway and Edgar Gardner Murphy of Alabama, with McKelway as the southern secretary. In order to commit himself fully to reforming child labour, McKelway left his position as editor of the Presbyterian Standard, moving to Atlanta in 1907, eventually moving to Washington D.C. in 1911, where he remained for the rest of his life.

With the support of Josephus Daniels, Charles Aycock, and the photographer Lewis Hine, McKelway led a crusade for child labor reform, culminating on April 9, 1912, when President William Taft signed a Bureau of Child Labor into being. The resulting national law created a minimum age requirement for employment, limited work hours, and required school attendance before one was allowed to work. This new law formed the foundation for future labor reforms to come.

In 1918, McKelway passed away, and was buried in Charlottesville, Virginia, by his wife and five children.